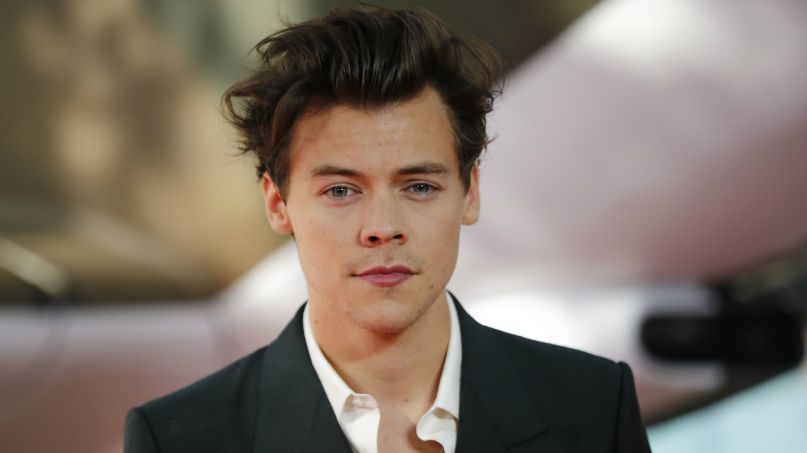 Harry Styles
Harry Edward Styles was born in Redditch, Worcestershire on 1 February 1994. He is the son of Anne Cox (née Selley) and Desmond “Des” Styles, who worked in finance. Many of his ancestors were farm laborers in Norfolk. Styles was raised in Holmes Chapel, Cheshire after his parents moved there along with his older sister, Gemma, when he was a child. He attended Holmes Chapel Comprehensive School. Styles’ parents divorced when he was seven and his mother later was remarried to Robin Twist; he died in 2017. He has an older stepbrother named Mike and a stepsister named Amy, children of Twist. As a sixteen-year-old, he worked part-time at the W. Mandeville Bakery in Holmes Chapel.
As a child, Styles loved singing, covering songs from Elvis Presley. While at Holmes Chapel Comprehensive, Styles was the lead singer for the band White Eskimo, which won a local Battle of the Bands competition. Styles has cited country singer Shania Twain as his “main influence” both musically and in fashion. He has also cited Pink Floyd, The Beatles, The Rolling Stones, Fleetwood Mac, Harry Nilsson, Freddie Mercury, and Elvis Presley as being influences. His music contains elements of soft rock, pop, folk, rock, and Britpop.
Following a suggestion from his mother, on 11 April 2010, Styles auditioned as a solo candidate for the seventh series of the British televised singing competition The X Factor, singing a rendition of Stevie Wonder’s “Isn’t She Lovely”. He failed to progress to the “Boys” category at “judges’ houses”. Four others in his age group also failed, but at the suggestion by Nicole Scherzinger, a guest judge, they were put together as an ensemble at Wembley Arena in July 2010, during the “boot camp” stage of the competition, thus qualifying for the “Groups” category. The group consisting of Styles, Niall Horan, Liam Payne, Louis Tomlinson, and Zayn Malik, got together for two weeks to get to know one another and practice. In 2017, Styles said he had suggested the name One Direction to his bandmates and they agreed to keep it.
For their qualifying song at “judges’ houses”, and their first song as a group, One Direction sang an acoustic version of “Torn”. Simon Cowell later commented that the performance convinced him that the group “were confident, fun, like a gang of friends, and kind of fearless as well.” Within the first four weeks of the live shows, they were Cowell’s last act in the competition. The group quickly gained popularity in the UK.
In 2016 to present, he has been busy with the solo album and acting debut. In February 2016, Styles left the group’s management company Modest Management and joined Jeffrey Azoff’s Full Stop Management. Styles launched his own record label, Erskine Records, in May and he signed a recording contract with Columbia Records as a solo artist, the same label behind One Direction, in June. Styles wrote the song “Someday” in collaboration with Meghan Trainor for Michael Bublé’s album Nobody but Me, released in October.
In March 2017, Styles announced his first solo single titled “Sign of the Times” and the song was released on 7 April, reaching number one on the UK Singles Chart. An accompanying music video for the song directed by Woodkid was also released, featuring Styles levitating and walking on water. The song was variously described by critics as pop rock and soft rock ballad with glam rock influences.
His self-titled debut album was released on 12 May 2017, whereupon it debuted at number one in several countries, including the UK, the US, and Australia. The record was heavily influenced by ’70s soft rock and was described by Variety as a “classic cocktail of psychedelia, Britpop, and balladry”. It received generally favorable reviews from critics and was included in several publications’ lists of the best albums of 2017.
Styles made his film debut in Christopher Nolan’s war film Dunkirk in July 2017, playing a British soldier named Alex who is a part of the Dunkirk evacuation in World War II. He appeared alongside actors Fionn Whitehead, Jack Lowden, Aneurin Barnard, Tom Hardy, Mark Rylance, Cillian Murphy and Kenneth Branagh in the film.

8. What was his first Film?

9. With whom he played his film?


CUT NYAK DHIEN
Cut Nyak Dhien was a leader of the Acehnese guerrilla forces during the Aceh War. She was born in Lampadang in 1848. Following the death of her husband Teuku Umar, she led guerrilla actions against the Dutch for 25 years. She was awarded the title of Indonesian National Hero on 2 May 1964 by the Indonesian government.
Cut Nyak Dhien was born into an Islamic aristocratic family in Aceh Besar. Her father, Teuku Nanta Setia, was a member of the ruling Ulèë Balang aristocratic class in VI mukim, and her mother was also from an aristocratic family. She was educated in religion and household matters. She was renowned for her beauty, and many men proposed to marry her. Finally, she married Teuku Cik Ibrahim Lamnga, the son of an aristocratic family, when she was twelve.
On 26 March 1873, the Dutch declared war on Aceh. In November 1873, during the Se-cond Aceh Expedition, the Dutch successfully captured VI mukim in 1873, followed by the Sultan’s Palace in 1874.
In 1875, Cut Nyak Dhien and her baby, along with other mothers, were evacuated to a safer location while her husband Ibrahim Lamnga fought to reclaim VI mukim. Lamnga died in action on June 29, 1878. Hearing this, Cut Nyak Dhien was enraged and swore to destroy the Dutch.
Some time later, Teuku Umar proposed to marry her. Learning that Teuku Umar would allow her to fight, she accepted his proposal. They were married in 1880. This greatly boosted the morale of Aceh armies in their fight against Dutch. Teuku Umar and Cut Nyak Dhien had a daughter, Cut Gambang.
The war continued, and the Acehnese declared Holy War against the Dutch, and were engaged in guerrilla warfare. Undersupplied, Teuku Umar surrendered to the Dutch forces on September 30, 1893 along with 250 of his men. The Dutch army welcomed him and appointed him as a commander, giving him the title of Teuku Umar Johan Pahlawan. However, Teuku Umar secretly planned to betray the Dutch. Two years later Teuku Umar set out to assault Aceh, but he instead deserted with his troops taking with them heavy equipment, weapons, and ammunition, using these supplies to help the Acehnese. This is recorded in Dutch history as “Het verraad van Teukoe Oemar” (the treason of Teuku Umar).
The Dutch general Johannes Benedictus van Heutsz sent a spy to Aceh. Teuku Umar was killed during a battle when the Dutch launched a surprise attack on him in Meulaboh. When Cut Gambang cried over his death, Cut Nyak Dhien slapped her and then she hugged her and said: “As Acehnese women, we may not shed tears for those who have been martyred.”
After her husband died, Cut Nyak Dhien continued to resist the Dutch with her small army until its destruction in 1901, as the Dutch adapted their tactics to the situation in Aceh. Furthermore, Cut Nyak Dhien suffered from nearsightedness and arthritis as she got older. The number of her troops was also decreasing and they suffered from lack of supplies.
One of her troops, Pang Laot, told the Dutch the location of her headquarters in Beutong Le Sageu. The Dutch attacked, catching Dhien and her troops by surprise. Despite desperately fighting back, Dhien was captured. Her daughter, Cut Gambang, escaped and continued the resistance. Dhien was brought to Banda Aceh and her myopia and arthritis slowly healed, but in the end she was exiled to Sumedang, West Java because the Dutch were afraid she would mobilize the resistance of Aceh people. She died on 6 November 1908.
Fill in the blanks with information about Cut Nyak Dhien mentioned in the reading text.
SHORT BIO
Name:
Place of Birth:
Date of Birth:
Place of Death:
Date of Death:
Parents and origins:
Name of husband:
Name of daughter:
Important dates on War:
Location: